In our big lost of my father Haj Hasan Abdulla Abdulemam

Thank you all for your nice condolences, wish you all the happiness

If Shara spoke, all eats hay

yesterday the superme leader khamenei spoke about the situation in Iran, and he got the final speech in Iran, he got the politic power and the Religious power, so he could just shut the states quite, no more protest or demonestrates, he just got the final speech, the last speech, no one inside iran can do any thing after his speech, wow, how come we still have such strong people and they can by one speech points his finger to where the things should it go, and it goes?

we have this idiom in Arab region if shara spoke, all of us should eats hay, its just to explain how shara is strong, and shara is the holy things they think its comes from God, and yesterday speech, was having that frame, it came from the superme leader in religious, it was coming from the biggest leader not only in Iran, in all shiite , he got the majority,

but my qustion is, is that the way we solve the issues? we have people demanding, people asking for what they think its their right, and we just shut them by these two powers? we don't set and talk, have some chat about the real issue, instead of blocking social networks web sites, blocking the blogs, SMS not working, Telephone is almost censored and mostely not working, BBC persian not working, other channels not working, Internet is too slow and very censored, forigens media not allow to work inside Iran, instead of having all of this, can't we just admit we have a problem and there is some thing wrong in this Iran so we need to find out whats people demands and what is people qustions, either we can answer them , obey then, or we can just talk with them, people wants some one to talk with them, i mean talk with them not talk to them, i mean some one get in to dialogue with them not giving order to them?

this kind of speech if its success now to shut things down in iran, it might not be applicable or acceptable for the next election

i hope that i will not be classified one of agents who works for USA or UK or worst Israel, but, this is the way i am thinking dear superme leader, and i like it this way, sorry i know you are waley elfaqeeh, but, i believe that welayat faqeeh is human thought not god verses and i don''t believe in it
Posted by Ali Abdulemam at 10:35 AM 4 comments:

Rafsanjani no in Iran now, he is in Iraq

If i hate some one in the power in Iran so i hate Rafsanjani, yes i hate him, and i think what ever najad said about him is true and what ever hidden is more, but, still i am supporting mosavi,

the News coming from special sources that Rafsanjani is NOT IN IRAN, HE IS IN IRAQ

Waiting for confirmation from the media
Posted by Ali Abdulemam at 10:40 PM No comments:

Khamenei, They love their country

Todays superme leader Khamenei speech, was clear about one point that i used to talk with my friends about it when we were talking about the situation in Iran as they were insist to use the power to crack down the protest and end it in the street while i was telling, they are 33 % of the voters so they have the right to protest and to loude their demands, today Khamenei telling directely all of the candidators loved iran and they tried to built up iran in different way, but they are building the same regime not different one

and i hope the paseej and pasdaran will know this from there leader that those protesters in the street are iranian, they love Iran and they are not peace of shit you need to get ride of it, they are IRANIAN
about changing the regime, khamenei said that using the street is not acceptable, and i can understand why he did said that, but i believe, people have the right to change their regime if they like to do, its all the people decision not the leaders

again
we are watching, is khamenei going to end every thing in the street, lets see
Posted by Ali Abdulemam at 3:45 PM No comments:

At the begining let say that having this election in one of our neighbour is something we should care about it because we don't have that much freedom, or less than that also

i watch the news, blogs, twitter, facebook, all the citizen media type during the last week in addition to the tradition media like alaalm TV and wanna compare my experience and thought with what is going on in Iran

first when i was watching alaalm, i felt that i am watching Bahrain TV , all the opposition are linked to forignes , they are not loyal, no permession for the opposition protest but for Najad its published in TV as the background during the news programmes, i didn't see any different between this totalirsm regime and our, both are using the same tools to prove for themself that we have the majority and the others even if they are 33% have nothing, have no access to the regime media, have no right to protest, have no right to loud their voice, this is not freedom kingdom this totalirism regime

Iran blocked facebook, twitter, sms yahoo, blogs, all the ports that citizens media wants to talk throught as the tradition media is not accessible for them, and why is that? they don't have the right to talk? to show the rest of word thier is something different in this country? their is something wrong with this kindom? and why these systems afraid for other voice to be heard? i don't know

Najads speech when he was saying that you broke the forignes planes and those are BAD, he was talking about whom? about 13 milions vote to Mosavi? he was talking about 33% from the voices they are agents for USA and Israel? is this is a speech for the coming presedent? instead of offering sharing power with this 33 % he is deleting them from the formula? this is not human freedom? this is Najad view and not linked to any human perspective
Posted by Ali Abdulemam at 10:32 AM 1 comment:

The crazy again in power

honestly i was supporting mir hussain mosavi because i feel Iran will need a presedent like Khatami, more freedom, more respect, freedom of choices to be made, not force to ? this is what i believe not in iran only but in every where in the world, but at the end, we are not iranian, we have to respect this crazy when he come to the power and we have to deal with him for the next four years

I was following the election by persian blogs, thanks god i know persian so it was easy for me , the strange things i discovered is, Najad failed in economic area, and its reflecting the poor people which is the majority in Iran, but the poor majority didn't talk about economy as its one of their criterias , these were talking that Najad is clean, we need to vote for clean people, cause god ask us to do so, wow, gods with you Crazy najad

I am very disappointed today and i might switch my telephone off because i don't want any one to make fun of me
Posted by Ali Abdulemam at 10:11 AM 9 comments: 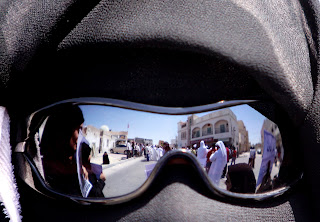 This pic was shoot yesterday in Karzakan when the news said, Karzakan's prisoners and Mameer's will not be released as the deal between the regime and the oppositions after the meeting with the ministry of interior, who confirmed that they will take them to the court, so we are back again to square number 1, but i am not talking about this, i am talking about this pic which is shoot by AP reporter , and all the local news agencies didn't publish this picture, as my friends always say, we don't have media in Bahrain.
Posted by Ali Abdulemam at 10:27 AM No comments:

as a member of www.america.gov to receive SMS about Obamas speach in Cairo univisity he said one word that should be highlighted
The people of the world can live together in peace. we know that is god's vision. now, that must be our work
i have to say that i like the way that Obama is dealing with media and not depending on traditional media, he sent his broadcast video message to Iran by Youtube, and now he is using most of the web 2.0 tools to broadcast his spech, facebook, youtube live, twitter, blog, ,, etc

its our time to work for all of the people to live together, but the big workload is not on our heads, its on the decesion makers who sould believe in this world

Obama your speach shouldn't be addressed to us, it should be addressed to those leaders in arabic regimes who your state is supporting them to do what they are doing to us

Thanks Obama, i really like you and like your speek but, its not to us, please addresse it in your private meetings
Posted by Ali Abdulemam at 2:13 PM No comments: