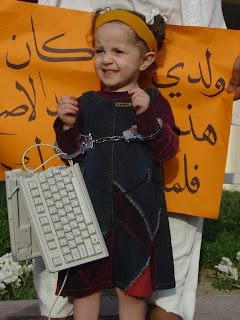 Few days ago, the secretary of state Hilary Clinton gave a speech about internet freedom, it’s a long speech but the subject is deserver more , I won’t talk about what she said and what is the real US politic or agenda, it’s for those politic to sell their stupid speech for the people, I want to talk about two main subject that Hilary mentioned them in her speech and I want strongly to highlight them so we can compare the promise coming from the secretary of state and the facts we have them in our hands.

The first point was about the freedom of getting the information and have the access to the information without any limitation, regardless of a parliament that can do nothing to get how many been nationalized in Bahrain, because its privacy as the government always said, I would strongly highlight the issue of Hasan Salman the one who published “public Record” with the names of national security forces so he deserve 3 years of jail, he is an online activism, he used the internet to publish public record, he is in jail because he publish that kind of information that based on Hilary’s speech everyone have the right to access, and based on the speech that united state will look in to these incidents closely from now on, so I hope this will be highlighted more and more because there is someone in jail and there is support from the united state to this event

This is will link me to the other point the speech was highlighted, it was about the companies

“For Companies, this issue is about more than claiming the moral high ground; it comes down to the trust between firms and their customers”

So here is the question

Dear united state government, if you are supporting the freedom of internet, and you are asking your companies to do so, tell us, what the hell is your companies doing in Bahrain to support this regime and albandar gate to filter the access to information, what tools this regime is using to block and censor, isn’t it united state companies tool? Blue coat which is the main filtering proxy used here in Batelco the main ISP used in Bahrain, its manufactured and product by American Company with the same name, switches used in www.bahrain.bh most of them is Cisco switches and there is a big news about the deal happen between the e-government and Cisco year ago, the same to Microsoft, so if the united state government is frankly speaking that they want the freedom of the internet, let us hear from them, why these American companies supporting our Retroactive regime, and we have to suffer with this censor ship for more time. What I am asking and hoping it will help, some pressure on those American companies so they stop selling this product to our regime, and if it’s possible cancel the license

Most of the deals happen between American companies and partners in Bahrain, you see albandar gate man there I don’t know why

video for an old protest when Bahrainonline moderators was arrested

BlueHost is ultimately the best hosting company for any hosting services you might require.