who to blame in Bin Rajab gate 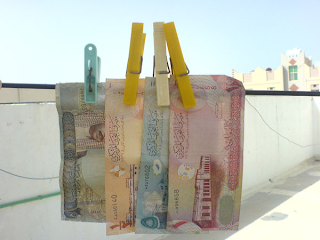 One of my friends called me one day and keep talking about Bin Rajab money loundry, he was refering to the royal order to dismiss Mansoor Bin Rajab from the Council of Ministers and he was saying that the king will find some one to tell him again that shitte is not trustable and you cannot give them more rights, see what this guy who you give him every thing and what he did to you, and he was afraid that thier will be more discrimination againest shiitte, well i simply answered him, this royal family doesn't need any reason to deal with us as a second citizen, plus, based on 2002 conistitution the ministers is reported to the king who is assigning them and fire them so the one who is responsible for this mistake in choosen the wrong men is not the sector as its the king him self, so if any one wants to blame some one for bin rajab gate, please forward your blame to your king
Posted by Ali Abdulemam at 4:48 PM

I reached this blog by accident, but I found that has a very interesting information. Good job. A greeting.

Get professional trading signals delivered to your mobile phone every day.

Start following our signals right now and make up to 270% daily.