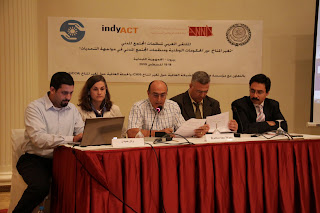 Beirut: August 18, 2009 – Arab NGO Network for Development (ANND), IndyACT, Arab Organization for Administrative Assistance (ARADO), along with Arab Climate Alliance held a workshop for the Arab Governments’ Representatives and NGO members from across the region, in Beirut, Bristol Hotel. The Regional Meeting for Civil Society Organizations from the Arab region opened on the 18th of August and will continue till the 19th to update, inform and discuss the concerns from the Arab region on the current climate change negotiations process, which will culminate this year in Copenhagen in the form of a crucial global climate change agreement to prevent dangerous climate change.

This workshop is part of the organizations’ continuous work on the Climate Change crisis by building awareness on the political and scientific aspects of climate change and the urgency of the cause! This conference was attended by more than 30 NGO members from Lebanon and 12 other Arab States. The discussions were led by established experts in the fields of climate change science and policy from the region and abroad. The discussions focused on the climate change negotiations process and the current lack of proactive engagement by Arab countries in the current negotiations happening under the UN Convention on Climate Change for a new climate agreement. Representatives of all Arab governments to the negotiations under the UNFCCC were invited to participate in the meeting, while only delegates from Saudi Arabia and Syria attended and were involved in an open discussion with regional NGOs on how the Climate Change agenda could be made a priority for respective National Governments.

"So far most Arab Governments have failed to engage proactively at the forefront of these potentially game changing Climate Change Negotiations ", said Wael Hmaidan, Executive Director of IndyACT. “Sadly the ones that have been engaging, such as Saudi Arabia, are considered obstructionists rather than supporting progress within these talks.”

“Climate change is a reflection of the failure of the global economic, social, and development model, reflected in the economic and financial crisis as well. Climate change negotiations should take that into consideration and address the issue in the context of reforming the global system and strengthening the United Nations role, the participation of the developing countries in global policy making on an equitable basis, as well as civil society's participation in building more just, democratic, and rights-based sustainable social, economic, and developmental alternatives", said Ziad Abdul Samad, General Executive of ANND, Lebanon.

The Arab stakeholders must realize the urgency of the problem of Climate Change and the irreversibility of its impacts across the region. “It would be a severe disappointment for other developing countries to see their Arab colleagues dilute the possibility for a fair and comprehensive Climate Treaty that would pave the way, through adequate financing and technology transfer for promoting a new low carbon development paradigm,” said Shruti Shukla, Southern Capacity Programme Coordinator, CAN –International

“Arab countries represent a number of key interests within the climate negotiations but for the moment its only the Oil Interests that are being heard - a real conversation is needed on how can oil-producing countries work towards an economy with a significantly lower carbon footprint” said Katherine Watts, Climate Policy expert from the World Wildlife Fund –U.K.

IndyACT along with Arab NGO Network for Development (ANND), Arab Organization for Administrative Assistance (ARADO) and Arab Climate Alliance (ACA) call on all news agencies, bloggers, journalists, etc. and Arab civil society to start following the negotiations and the role of Arab governments in them, as well as to seriously commit to the cause and the critical urgency of the matter and help push for an ambitious, fair and binding climate change agreement!

Further information on the climate change campaigns in the Arab region can be found on:

Posted by Ali Abdulemam at 6:03 PM