Its all about color? 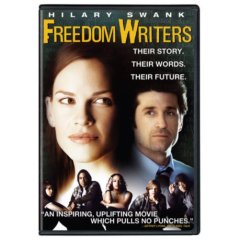 Watching the "freedom writers" film i just picked up this word when the teacher debating with them about the hate speach, she was trying to tell them that all of you are equal as a human and they were denied that and insist that the problem is about thier roots, or what did they call it " its all about color? as the class has multi-color, black, asian, south america amercian ... etc. she was telling them that your features if you didn't left the gangs will be either killed or in jaile, but they were saying what is the other features we have rauther than this? its the natural of thier society it will lead them to this or that, they were hopeless strongly believe that this is thier faith. how the teacher did change them this is the story of the film
she was trying to make them clearly understand that with the discussion they can be some thing else, some thing they choose not some things others including the society will choose it for them
i just picked up this " its all about color" to talk about bahrain, its Summarized our problem here in Bahrain, its all about your color! are your Arabi or Bahrani, are sunni or shite, are persian , from others brought here , its all about this sector and what ever you will get its about where you belong to, its clearly understood here in bahrain, and because the majority is shite here in bahrain, and because the royal family has the problem with them so this is our problem , its just we are belong to where?
the royal family or the political leaders and others advisors or what ever, they can't understand that they didn't choose thier sector as i didn't as you are the reader didn't, no onw choosed to be sunni or shite or any thing, its just choosen by the creator and whome ever will say i choosed my self its rarely happen , so why i am been judged because of what i didn't choose, even to be exsist in this Bahrain i didn't choose it.
what i want to say that the system built up here didn't give the people any choose to develope or any hope that one day bahrain will be some thing else, i grow up in this countery to see my causins in jail because they were asking for freedom, i see forign military hitting the original national people because of thier belong , i grow up and i have this feeling, i will not have any choise to be in Bahrain Distance Force or any critical position only because i am shite, and in other hand, i will see those Neighbors from other sector will get the house while i can't, will get the nationality in 6 months where i can't, will have good salaries and good positions while i can't after long fight, at the end i will end up with a system control by this royal family who don't trust thier people and choose to change them, at the end i will have no feature in this countery except to go to jaile, or to die, or to be out of this and honestly this system successe in this and all of us thinking of changing our nationality as this nationality doesn't have any value any more and all of that because of those people who is in charge now
so our problem here in bahrain you can sammerize it with " its all about color"
Posted by Ali Abdulemam at 7:52 PM No comments: Links to this post

Posted by Ali Abdulemam at 10:02 PM No comments: Links to this post

Posted by Ali Abdulemam at 10:00 PM No comments: Links to this post